Psoriasis, as we know the skin condition today, is known for its red, crusty or scaly appearance, and the annoyingly itchy sensation that comes with it. It comes as the result of faulty immune responses that affect the process of cell turnover. 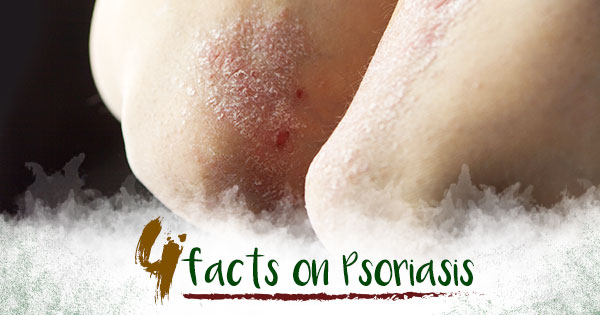 Common in adults under 35 years old, what happens is that the length of period for skin renewal is cut short—from the normal length of one month to a few days—causing an overproduction of skin cells and the abnormal build-up or the visible patches on the surface.

Get a deeper understanding of the skin condition with these factoids on Psoriasis.

What is the origin of the word “psoriasis”?

Psoriasis is a chronic skin condition that afflicts people of all ages. It is known for its red, crusty or scaly appearance and the deep, itchy sensation that comes with it. This condition comes as a result of faulty immune responses that affect the process of skin cell turnover.
Evidence of this disease was recorded in ancient times. Greek doctors like Hippocrates (460-377 B.C.) and Galen (133-200 A.D.) were amongst the first to observe this disease and give it a name, from the Greek words psora (to itch) and sis (condition): psoriasis.

Psoriasis can appear at any age, starting in one’s teens, and reappear again throughout one’s lifetime, usually as a result of some trigger. Many report that stress, infection, skin injury, and hormonal changes can trigger a flare-up of psoriasis.
In a person who suffers from psoriasis, something in their immune system causes their skin renewal process to go into overdrive. The body begins to overproduce skin cells in a short period of time, eventually forming several layers that look like dry, whitish or silvery patches on the surface of the skin.
These patches are seen in joint areas like knees and elbows but can appear on hands, feet, arms, and even on the scalp and face.

It’s chronic, but not contagious

One of the most common misconceptions about psoriasis is that it’s contagious. It’s not.
Psoriasis patches appear white and can often feel swollen, itchy, and sore. They may crack and bleed. But one does not catch psoriasis by being in contact with someone who has it.
Medical experts still don’t know the exact cause of this illness, which originates in the immune system but are looking into what causes the faulty signals that interfere with cell turnover. Genetic predisposition seems to be another factor.
Psoriasis is believed to affect as many as 100 million people worldwide, according to the World Health Organization. And if a parent has psoriasis, one of their children has a 10 percent chance of developing the skin condition.

There is no known modern cure for psoriasis. But that doesn’t mean that there’s nothing you can do to control or manage it. You should do something about it.
Leaving psoriasis untreated raises the risk of other health conditions such as diabetes, heart attack, depression and obesity. There’s also the risk of psoriatic arthritis, a persistent and disabling illness that requires aggressive treatment and medication.
In countries with deep histories of traditional medicine like India and the Philippines, symptoms of psoriasis have been treated using Moringa (malunggay), which is antiseptic, anti-microbial, and anti-inflammatory.
Psoriasis and its flare-ups can be controlled with deeply-moisturizing moringa oil. Use every day after a bath or as needed to soothe itch and provide moisture for cracked, dry skin, and scalp.

Bungang araw or prickly heat can be unpleasant & irritating. Learn what causes bungang araw and how to treat it with Moringa-O2.

How to Treat Bungang Araw

Bungang araw or prickly heat can be unpleasant & irritating. Learn what causes bungang araw and how to treat it with Moringa-O2.

What Makes Moringa an Effective Shampoo for Hair Loss?

Having the best shampoo for hair fall allows you to have thick, luscious hair — locks that completely cover the head, from the hairline, to

Everyone knows moringa or malunggay as the green leaves in your soup, but did you know that there’s so much more to moringa than how it’s used for cooking? Here are some quick facts about this powerhouse plant.

The Many Benefits of Malunggay: What Can Moringa Do For Your Body?

Malunggay, a superfood, contains more than 90 nutrients and 46 types of antioxidants. It can be consumed by everyone, so small children and adults alike can enjoy the many benefits of malunggay.

How to Protect and Restore Hair Damaged by UV Exposure

Many of us are used to wearing sunscreen on our faces and protecting most of our body against the rays of the sun. The thing

Love your hair even more! Keep it healthy with Mor

Make each day beautiful for you and your family wi

How do you dry your hair? Keep it strong with Mori

What's in our name, Moringa-O2? It's Moringa, Oliv

Time to treat yourself to deals and discounts up t

How to Treat Bungang Araw

What Makes Moringa an Effective Shampoo for Hair Loss?